Kingdom of Serving Hearts Part 2 and 3 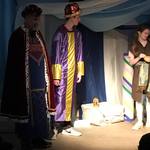 Selfishness was quite pleased. So the King talked to each of His villagers, one by one and told them that they were looking at themselves and that kept them trapped in the prison. To get out, they had to apologize to the King and look to Him. Some of the villagers did so and were freed from the prison. But some ignored the king and stayed trapped in the selfish prison. But the king never stopped trying to get them out of the prison.

Selfishness tried a different approach with the people, to get them all back in the prison. Selfishness started telling people how good they looked while serving, how much the king needed them and how amazing it was to get praised for serving. Everyone started serving for the wrong reasons, which was just as selfish as before and this put them right back into the selfishness prison! Once again, the king talked to the people and some of them apologized and started looking at the king, instead of themselves.

The Kingdom of Serving Hearts has taught us quite a few things about serving. Serving is something that we will naturally do when we are right with God, because God serves. Selfishness and pride can get in the way of serving, in tricky ways that we can't always see. But God shows us when we are being selfish and helps us turn back to Him.

May 31
Generosity of the Kingdom